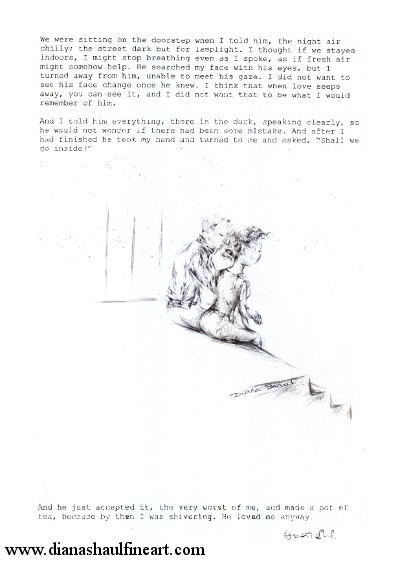 Story: We were sitting on the doorstep when I told him, the night air chilly; the street dark but for lamplight. I thought if we stayed indoors, I might stop breathing even as I spoke, as if fresh air might somehow help. He searched my face with his eyes, but I turned away from him, unable to meet his gaze. I did not want to see his face change once he knew. I think that when love seeps away, you can see it, and I did not want that to be what I would remember of him.

And I told him everything, there in the dark, speaking clearly, so he would not wonder if there had been some mistake. And after I had finished he took my hand and turned to me and asked, 'Shall we go inside?'

And he just accepted it, the very worst of me, and made a pot of tea, because by then I was shivering. He loved me anyway.

About the artwork: Created as a collaboration between sisters Samantha and Diana Shaul, this is an illustrated piece of microfiction, presented as a page from a manuscript.

The story was written by Samantha and the text has been printed on the paper using a laser jet printer, adding an air of authenticity. The illustration was created by hand by Diana after the printing of the text. The artwork is signed by both sisters.